A Look Inside Americas Most Expensive House On The Market

Article by: Karen Hua from Forbes

The most expensive home for sale in the United States just hit the market for $250 million—and it includes a helicopter, complete car and art collection, and seven full-time staff. 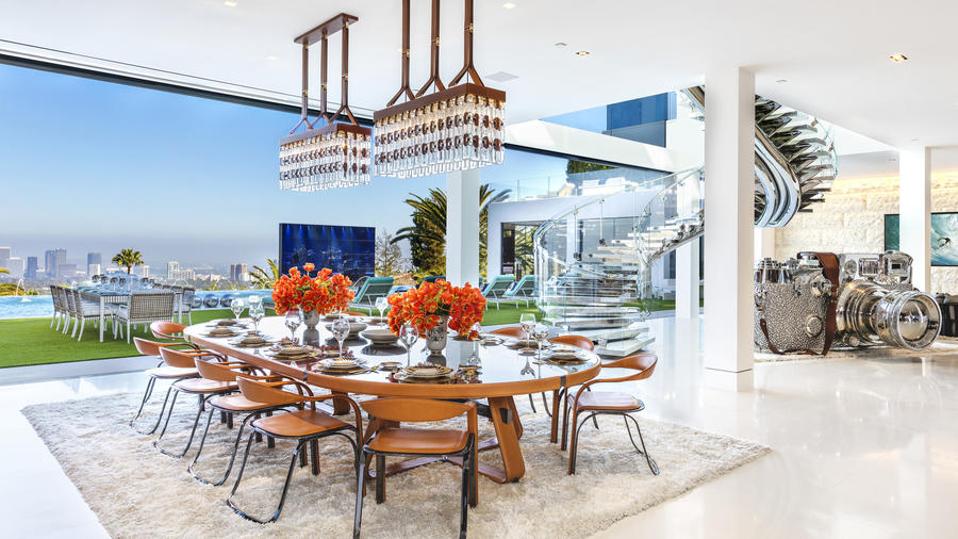 With kitchens both indoor and out, a live-in chef provides a bespoke dining experience around the clock.

Real estate developer Bruce Makowsky (of BAM Luxury Group) largely builds properties for billionaire buyers, and he designed this home "on spec"—without a buyer in mind—but with the confidence that it would inevitably entice another billionaire. His assurance wasn’t overshot, as the house has already attracted more than half a dozen potential buyers after less than a day on the public market. 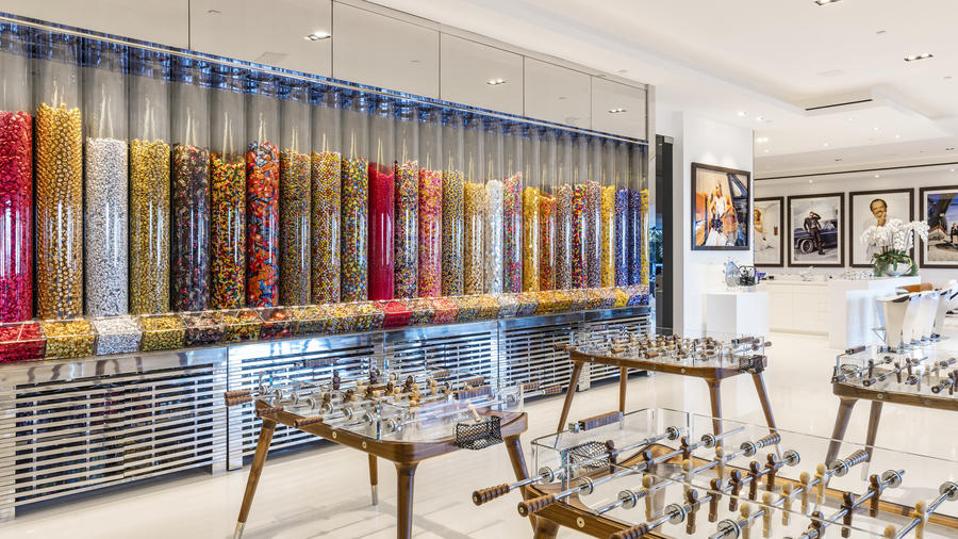 Makowsky spared no expense in creating the most excessive adult (and child) fantasy land—curating a lifestyle unique and exclusive to billionaires. His ideal homeowner would be somewhat of a homebody—someone who appreciates extravagant amenities at home so he/she never feels the needs to leave.

"People spend over half their lives in their house," he told CNBC. "So when you're home, it should be the ultimate oasis. You should have every single entertainment aspect you could have in one home." 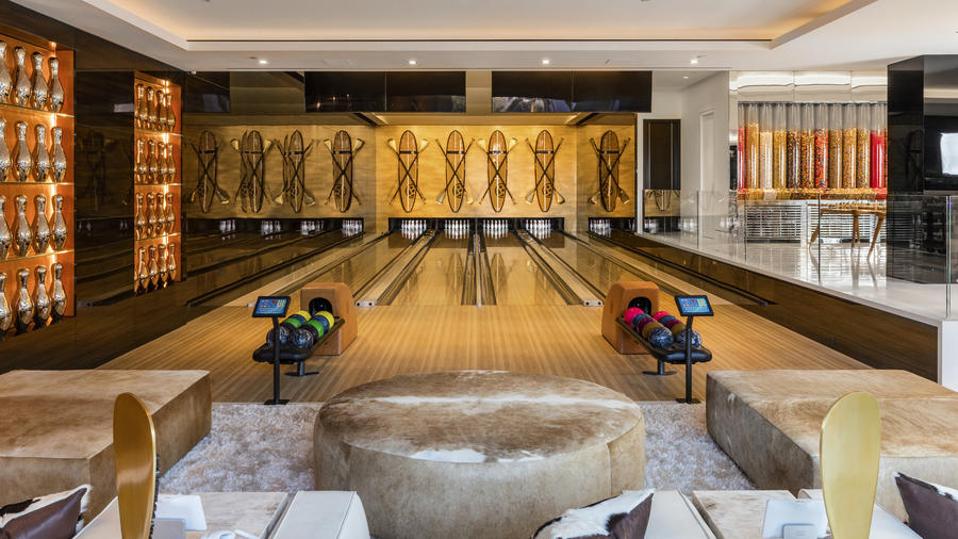 The mansion is just as much a party-pad as it is a family-friendly home. 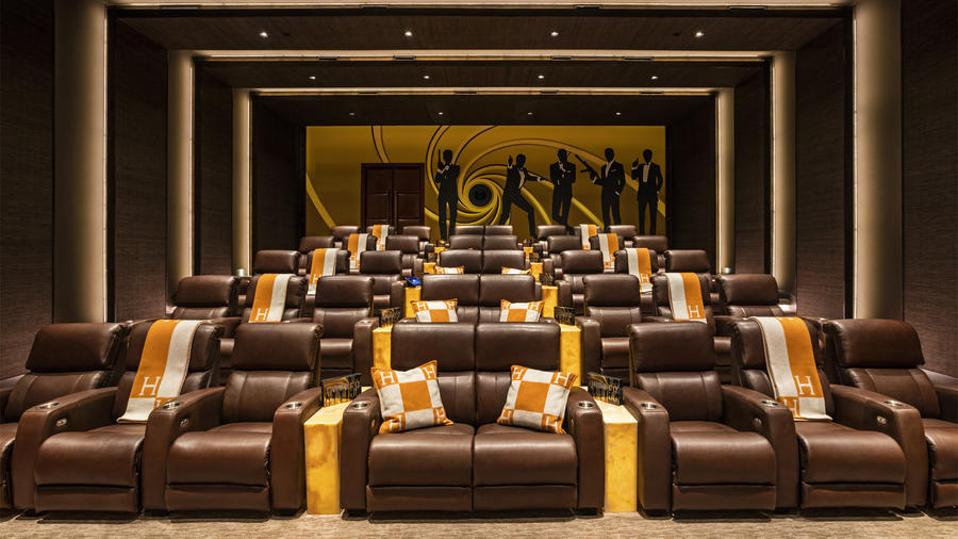 The 4K Dolby Atmos Theater is usually seen in commercial movie theaters instead of private houses.

Thus, Makowsky kept recreation in mind while designing: the four-lane bowling alley is lined with gold pins; the 40-seat entertainment room with a 30-foot TV is the most advanced home theater in the country; and the game room may as well be the "glass room"—with glass ping-pong and Foosball tables, a $12,000 glass pool table, and glass candy dispensers. 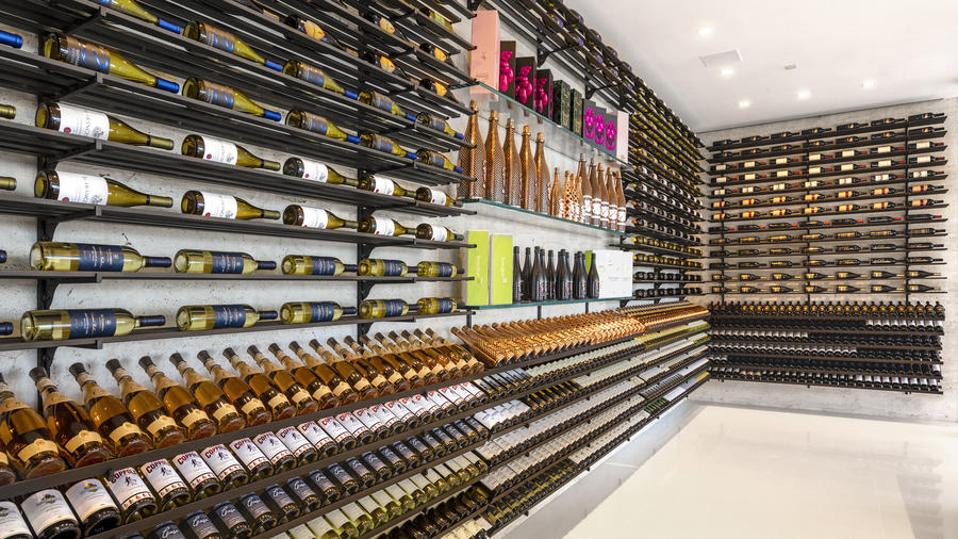 Built for entertaining and hosting, the house will live quite a while before the alcohol runs out...

Though the home boasts two wine cellars stocked with the world’s finest Champagne, the 85-foot-long infinity pool outside also includes a swim-up bar and outdoor theater. 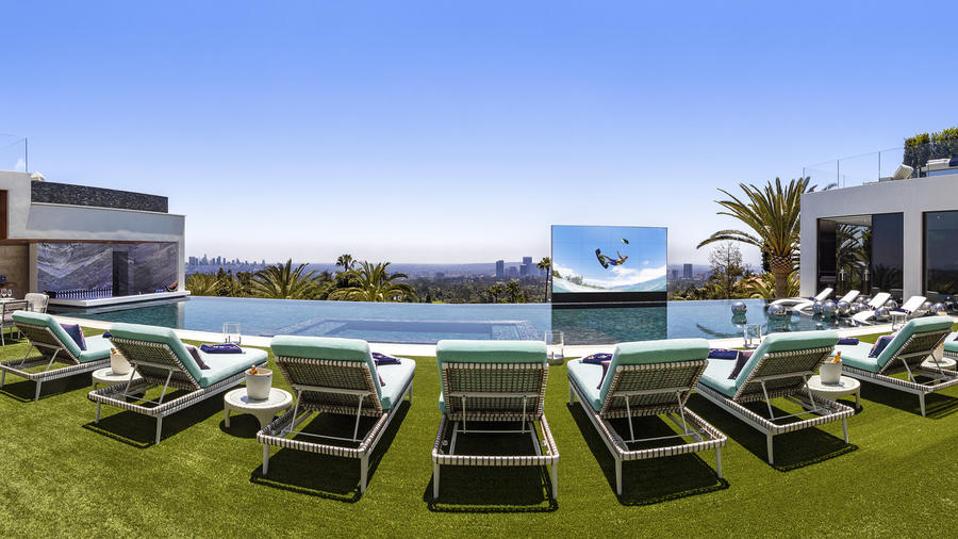 Makowsky likes to measure his TVs by feet--so this 18-foot-wide hydraulic screen rises over the pool and costs $2 million alone.

“Today, people are spending $300 million on a boat, and they use it about eight weeks a year,” Makowsky explained to the Los Angeles Times. “Then they are living in a $30-million to $40-million home.” 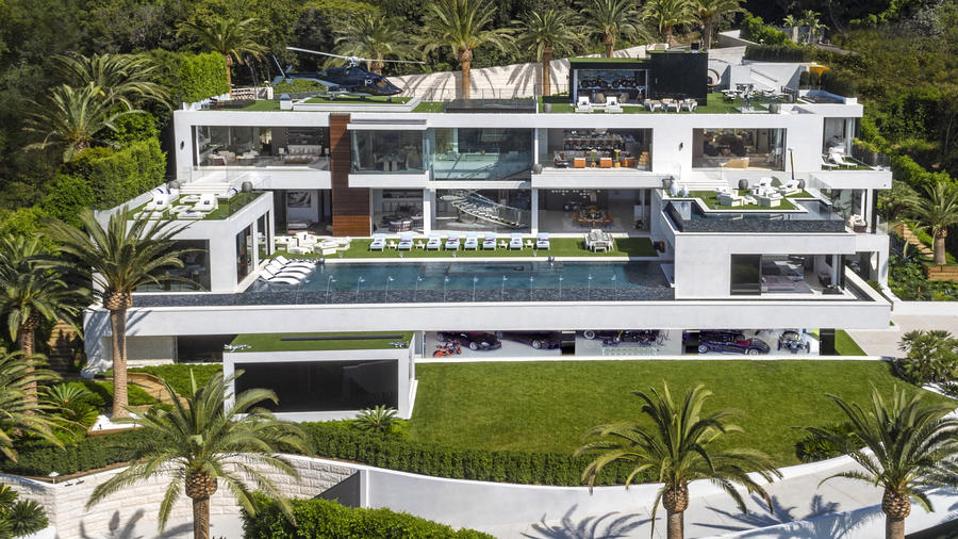 Commuting across this massive compound? Take an elevator lined with alligator skin or a $2 million handcrafted steel staircase. 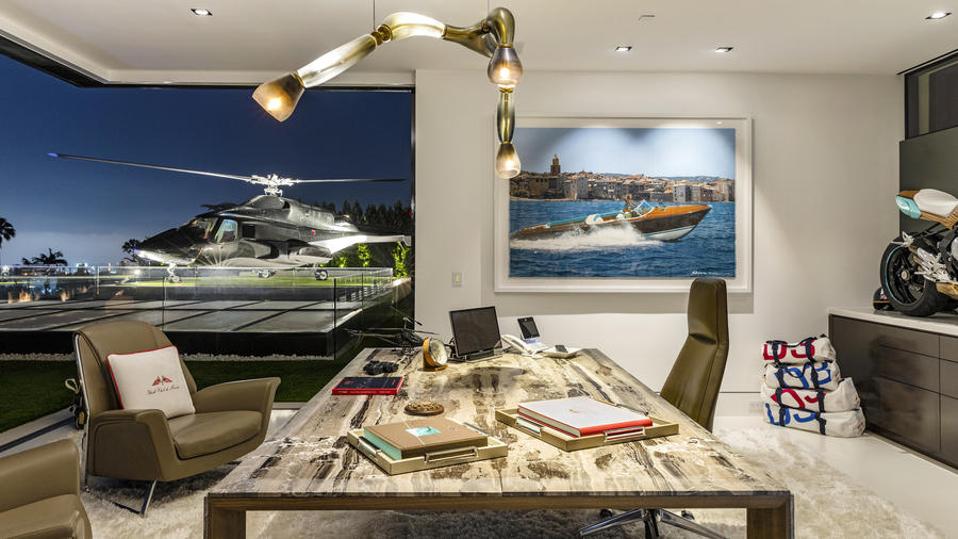 The mansion's moat (pictured above) and its nautical décor reflects Makowsky's love for ships and travel.

So, Makowsky filled this discrepancy by designing the mansion with the idea of “more is more” in mind. A multi-millionaire himself, Makowsky—infatuated with ships, collectible vehicles, and luxury travel—furnished the home with the opulence of a mega-yacht and nautical-themed décor. 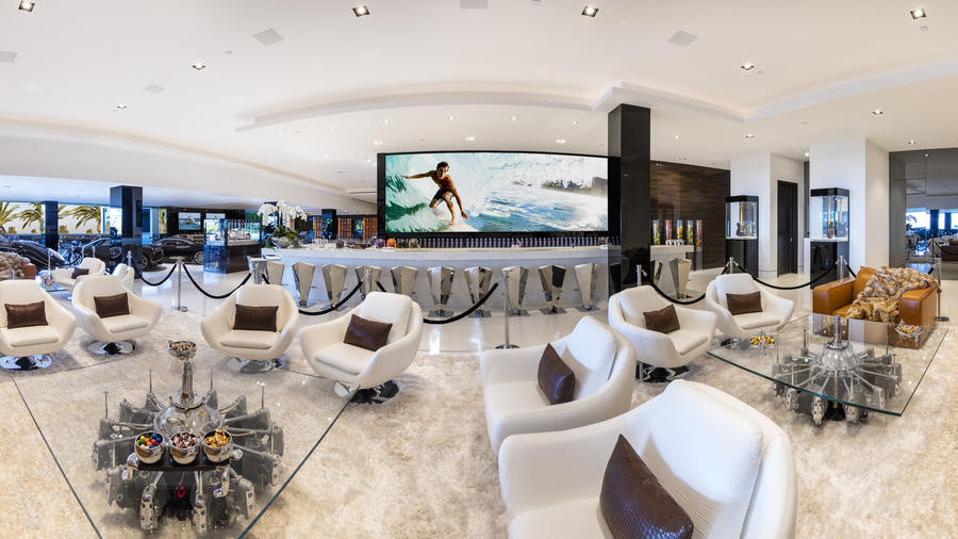 In lieu of a garage, the 12 vehicles take up almost the entire bottom floor along with the auto lounge.

Appropriately, Makowsky encircled the estate with a moat of canals, as if to compensate for the fact that the property doesn’t sit by a sea shore. A Hobie Cat sailboat even rests on the deck, albeit with nowhere to sail. Wide-screens on each floor project panoramic city-to-ocean “views”—and Makowsky, whose BAM Luxury Group also develops audio-visual systems, ensures that every room is a cinematic experience.

As functional as the home is, though, the sailboat in the moat and the decommissioned helicopter on the roof serve solely as accessories—both unusable, but there for simply as another display of wealth. 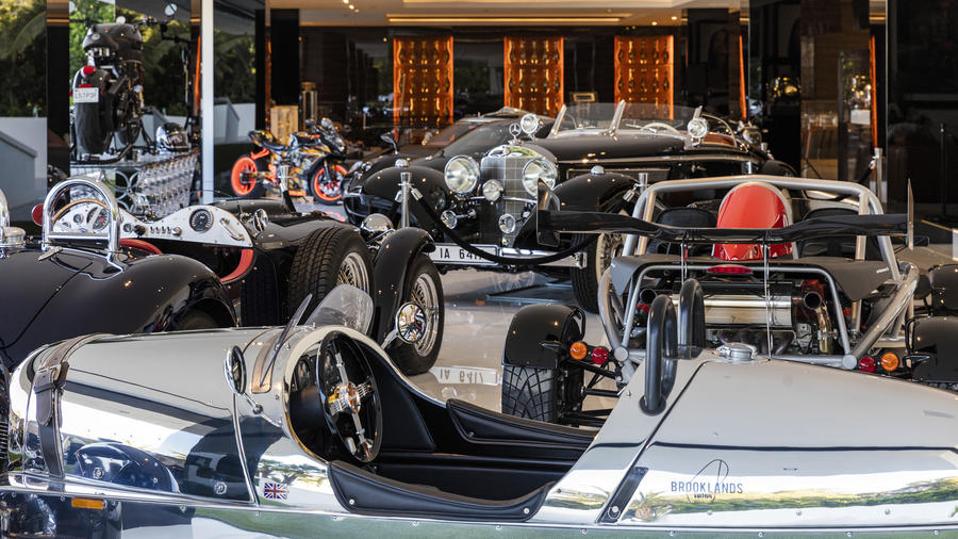 Even the staff gets a brand new white Ferrari 488 to chauffeur residents around town.

Across the house's entire bottom floor, 12 of the most exotic vehicles sit next to a lavish auto lounge. The collection, worth $30 million, contains a one-of-a-kind Pagani Huayra, the legendary "Von Krieger" 1936 Mercedes 540 K Special Roadster (valued at more than $15 million); and 10 of the rarest, fastest motorcycles ever created. 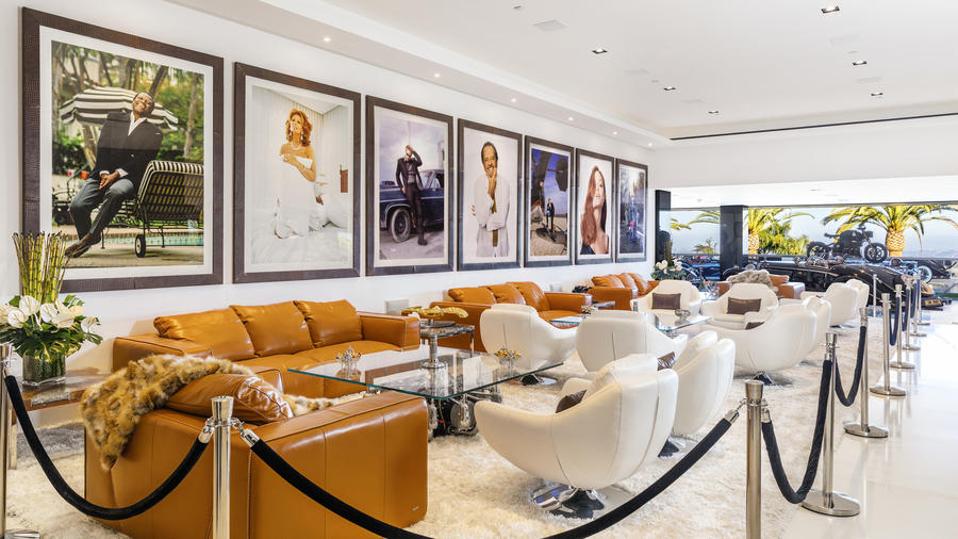 The home is impeccably decorated with the finest artwork from around the world.

In addition to an auto gallery, the home features 130 art installations, including an interactive series of the Seven Dwarfs. 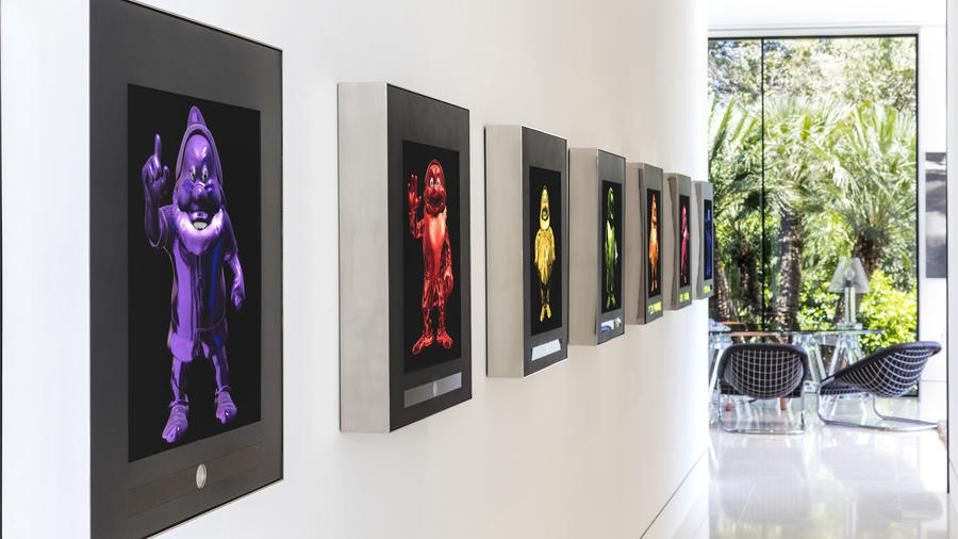 Makowsky has even offered to pay a two-year salary for seven full-time, live-in staff—including a chef, chauffeur, and masseuse—over a two-year period to attend to every nook of the home. 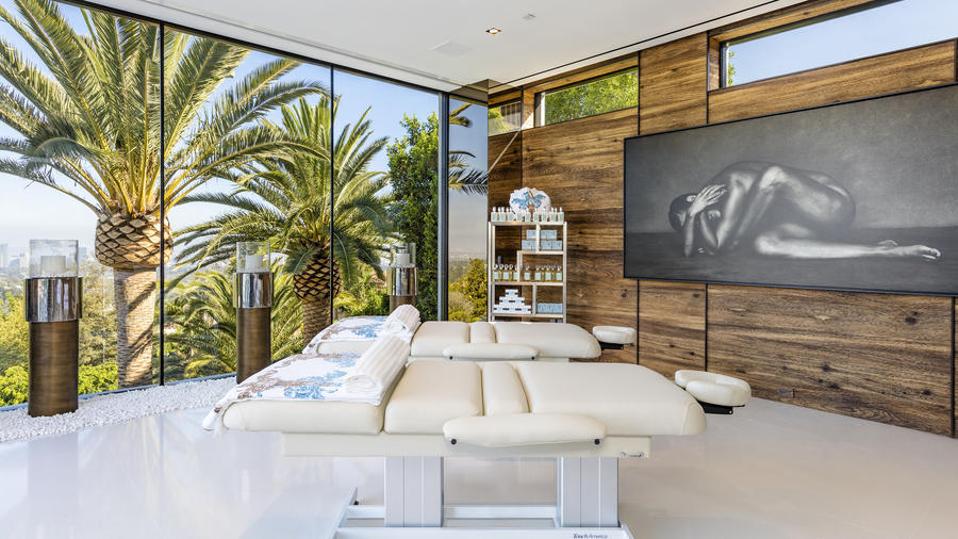 A masseuse resides in the home to be of service at any hour.

The mansion has far surpassed recent record listings in the Los Angeles area, including the Playboy Mansion and the former Spelling Estate, both of which held $200 million asking prices. The property has even eclipsed the current U.S. record holder, a $195 million mansion in Manalapan, Florida. 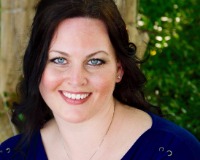